Now, you can vote to choose what programming language we add next.

If you want something that’s not on this list, mention it in a reply.

Four new languages have been added experimentally. Three of them are based on the results of this poll:

All of these languages are marked as experimental right now. If you face any issue while using them, please let me know.

Where is the fourth one?
I think you should have added Julia on the poll also. ( A language by MIT, somewhat like Python but aimed to gain speed like C )

The fourth one is Brainfuck. It would be a nightmare to solve problems with it. But I thought we should have at least one esoteric programming language.

You can find the list of languages with some details here: https://toph.co/languages

The page is being revamped. So it will change over the next few days.

P.S. In the meantime, I have also added support for Haskell and updated a few of the existing programming languages.

Talk about timing, you replied to me just when I had found it out myself.
Btw, Brainf*** ?
funny.

We are hosting a training contest from the “Coding Para” community. There some member use “Lua” as primary language. But I noticed Toph doesn’t support Lua (yet). It would be great if Toph had “Lua” compiler. Can you please add “Lua” to toph? 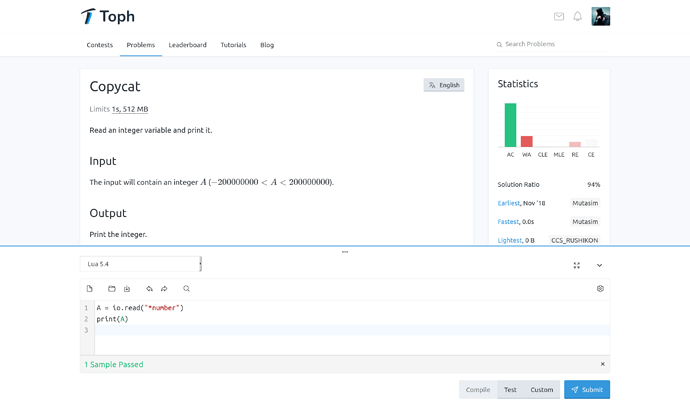 So support for this programming language should be considered experimental.

You will want to let your community members know that they should test this out now, before the the contest, and share feedback (if any).

Thank you very much for such fast response. I will tell them to test it out.