Earlier I tried to use the Numpy module in Python3 to use the matrix multiplication operator. But it failed. Note that this module only exists in Python 3.5+ versions. And then, many codes which run completely fine in my Python 3.7.3 interpreter shows Runtime Error in Toph. So, I was wondering about which compiler or interpreter versions Toph really uses. And also, I will demand an upgrade for Python3 interpreter.
Re: It is really frustrating to debug python codes in Toph. Why? Because you will not receive any error reports. I hope that the developers of Toph will look into it.

@touhidur You can learn more about the languages and how they are configured from here: https://toph.co/languages

This page also mentions which versions of the compilers we are using.

Numpy is an external library and it has not been included in the environment where you submitted codes are run. So it is expected that you will not be able to load the module. We may consider including it in the future.

We cannot really show you the stderr for your run-time errors. This could be used as an exploit to extract test case I/O. However, once custom invocation/running is in implemented, you will be able to see run-time error for your own test input.

And also, I will demand an upgrade for Python3 interpreter.

We prioritize suggestions and requests over demands.

@touhidur We have added the custom test feature to the IDE.

You can now see whatever is printed to stderr (e.g. during run-time errors).

WoW! That’s great! I think that it will further increase the usage of the Toph IDE.

Another thing I noticed about the IDE and thought to inform Toph that I think the Border of the IDE should be less. Its an editor after all so it should show text using the most area it can.

When writing bigger lines, it feels better that way.

However, it’s my personal opinion only. Don’t know if others feel the same way.

And also expecting a find and replace feature next. Go ahead Toph!!

@touhidur By border, do you mean the empty space on the left and right side of the editor?

H’m… I think we can add an option in the preferences that allow you to use the editor in full-width mode.

@hjr265 The Custom test feature is good. But it seems that when the Custom and Test buttons are clicked at the same time, they graphically overlaps each other.

Although it might not be called a bug but it can surely be considered as a graphical glitch I think?

@touhidur Eventually the two features will be merged and you will have one button: Test.

For now, the two features use two separate APIs and so they exist separately on the user interface.

It’s an annoying graphical glitch, but once they two popovers are unified, this shouldn’t be an issue then.

@touhidur You can now use a wide layout: 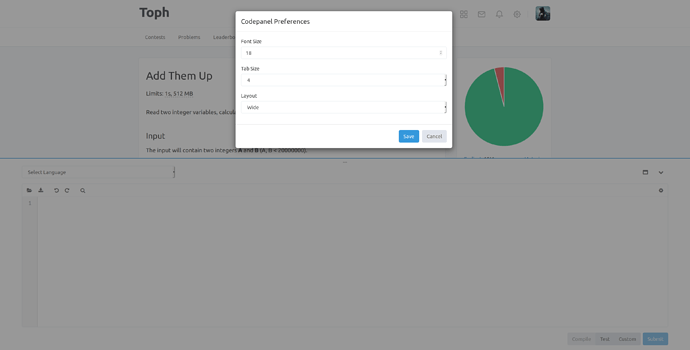